Tuesday started with Jeffrey Carver from the University of Alabama presenting What we have learned about using software engineering practices in scientific software. They took a multi-pronged approach to studying scientific software, from conducting surveys and workshop to direct interactions and case studies. From survey work, his team was able to group problems scientists were having with their own software into four main areas: rework, performance, regression (testing), and forgetting bugs. From this, they could see what software engineering practices might help with solving the problems.

Case studies brought numerous lessons to light; they found that the use of higher-level languages was low, performance competes with other goals, and external software use can be seen as risky. Workshops highlighted some of the differences between scientist programmers and software engineers and their domains. Scientist developers often lack formal software engineering expertise but have deep knowledge of their domains and are often the main users of their software. Quality goals are different, too; scientists would rather software not run than return an incorrect result. This project demonstrated that there is a need to eliminate the stigma associated with software engineering and that software engineers need to understand domain constraints and specific problems. PDF

Every presentation sparked lively Q&A and discussion, often throughout the presentation, and this one was no exception.

The next presentation was Engineering yt by Matthew Turk from NCSA at the University of Illinois at Urbana Champaign. He provided context and information on this well-cited community-developed project, discussed how the community was built, and its adoption of a code of conduct. YTEP, yt Enhancement Proposals, provide a method to manage suggestions for improving yt. Communication methods within the community are well thought out. The challenges of creating and managing the community sparked a lot of discussion; large software projects can have many things go wrong. 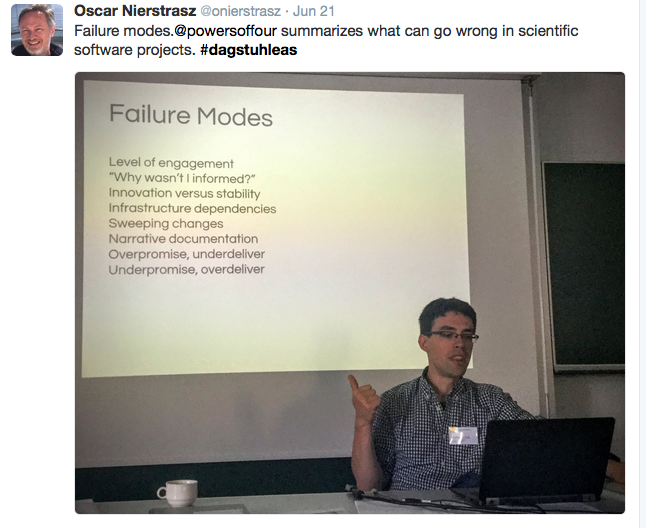 Discussion among the group made Matt’s presentation run long, making it necessary to break for coffee before Matt’s talk was done and then return to it after the break. The group was very engaged throughout the day; fortunately, the schedule accommodated the frequent discussions in every presention very well.

After Matt’s talk, Caroline Jay (University of Manchester) and Robert Haines (Software Sustainability Institute) presented Software as academic output. They discussed software’s role in research, when it can be a tool that enables research or the actual research itself, and how this is different depending on the discipline and the functionality of the software within the discipline and the role of the person using the software. They made the point that “Software isn’t a separate thing — software could exist without the paper; the paper couldn’t exist without the software.”

Oh, there was much more goodness in this presentation, which was interrupted by lunch, than I have time to report, including The Horror, as it was termed — the steps necessary for someone to replicate the computational work on one of the research projects this presentation covered — and Robert’s work on making this computational work software available in Docker. It also touched on the FAIR principles for computational research and academic software, and like the other presentations, generated lots of discussion, including conversations in the group on ethical considerations. PDF

The last formal presentation of the day, before the breakout workgroups, was by Claude Kirchner (INRIA) on the Software Heritage Project. He covered the rationale for this project, which includes the inconsiderate or malicious loss of code and the desire to preserve “our technical and scientific knowledge.” The Software Heritage Project has set out to preserve all the software. Yes, you read that correctly: All the software. Fortunately, a version of the slides for this presentation are online so you can see them for yourself! The site is scheduled to go live next week and I look forward to seeing it.

After Claude’s presentation, we went into breakout sessions.

I joined a breakout session on getting a standing award for scientific contributions through software created. The other breakout sessions were on creating a research software engineering handbook and academic software project typology. All groups reported back before the day’s session ended for dinner. Quite an informative, exciting, and productive day!