Now that I’ve written extensively about days 2-4, I am cycling back to give day 1 its due, but first will say the sharing started on Sunday June 19 as people arrived for both the week-long Engineering Academic Software Perspectives Workshop and the three-day Information-centric Networking and Security Seminar; cake and coffee is available upon arrival, which gives folks an opportunity to meet, and conversation between participants in both workshops flowed easily. A 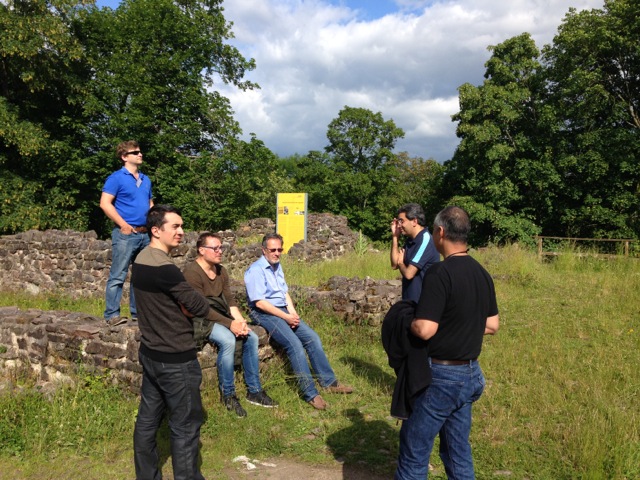 group of us decided to walk to the old castle ruins on the hill — up many steps — and it was on this little jaunt that I learned firsthand about stinging nettles (having only read about them before) with Andrei Chiș providing most of the hands-on instruction. He and I experimented with different nettles to see which produced the greatest stinging/welts; oh, the things we do for science! Those who had been unwilling victims of the plants provided more data points, and our quick survey leads us to suspect that the more mature the plant, the greater its “don’t touch!” defenses.

On Monday morning, we started with lightning introductions. We had been asked to create two slides, one on our relevant background and another on our interests for future use; a list of workshop participants and intro slides are available online.

Next came presentations; first up was Dan Katz to talk about WSSSPE (Working towards Sustainable Software for Science: Practice and Experience), pronounced “wispy.” He shared the history of the organization, noting that three large annual meetings had been held, with several smaller interim meetings also having taken place. WSSSPE’s progression was to first identify challenges regarding software and best practices for sustainability, then to discuss solutions and ways to enable change, and then at WSSSPE3, to take action and encourage people to work in groups to put into practice the identified solutions. Katz’s presentation included an overview of each of the WSSSPE working groups and the progress each group has made. Some of the working groups overlapped with efforts taking place elsewhere; the Software Credit Working Group, for example, shared much in common with Force11’s Software Citation Working Group, so the decision was made to work on combining the two groups (which was successful) and for members to work on the Software Citation Principles that were being developed (which was also successful).

Katz also shared lessons learned from WSSSPE3 — what had worked, what could have worked better, and what didn’t work. He outlined what is planned for WSSSPE4 (taking place this September in Manchester), listing two tracks for the event: Building a sustainable future for open-use research software, which will concentrate on defining the future of open-use scientific software and initiating plans to arrive at this future; and Practices and experiences in sustainable software, which will concentrate on improving current practices. Katz concluded his talk by sharing links to the reports for WSSSPE1, WSSSPE2, and WSSSPE3 and the social media sites. PDF

The next presentation, Supporting Research Software Engineering, was by Mike Croucher. His talk focused on his work as an Engineering and Physical Sciences Research Council (EPSRC) Research Software Engineering Fellow; he is one of only seven to be awarded this new fellowship. He helps scientists improve their software in various ways, such as making it faster, more reliable/robust/user friendly, and more sustainable. (Now that I’ve typed that, Harder, Better, Faster, Stronger is playing on the radio in my head.) This has to be done carefully, for as Croucher put it:

The phrase “do computer science to them” was echoed throughout the rest of the workshop; this idea — acknowledgement of that fear — seemed to resonate with many.

Croucher shared some of the outreach and education activities he’s been involved with, one of which was a (gentle) self-paced R tutorial held in a café. Volunteer facilitators walked around to answer questions, clarify information, and unstick people who got stuck and the session was a rousing success, so much so that there are now requests and expectations that more will be held!

It was acknowledged at the beginning of the day that academic software faces many challenges; Croucher’s presentation covered some of them, and included this stark slide: 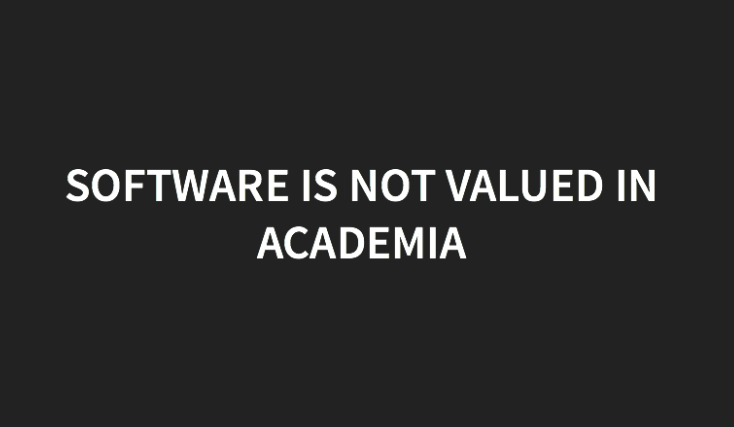 He also mentioned the lack of funding for software activities, that soft-money researchers are discriminated against in favor of tenure-track and tenured faculty, and other issues. Oooo, he got a great discussion going with these and other points! In the active discussion, Cecilia Aragon made the point that we need to stop calling software “infrastructure,” as software has intellectual content.

Though there are challenges, it’s not all bad — things are improving. The Software Sustainability Institute is funded by several organizations, the UK’s Engineering and Physical Sciences Research Council (EPSRC) has recognized the importance of software through funding of the Research Software Engineers, and a Horizon 2020 project to provide “substantial funding” for open source maths research software. Croucher’s vision of the future includes core-funded research software engineers and a hope for tenure awarded on the basis of software contributions. He closed his excellent presentation with concrete steps for changing the perception of software engineering and leading a change in culture. Slides 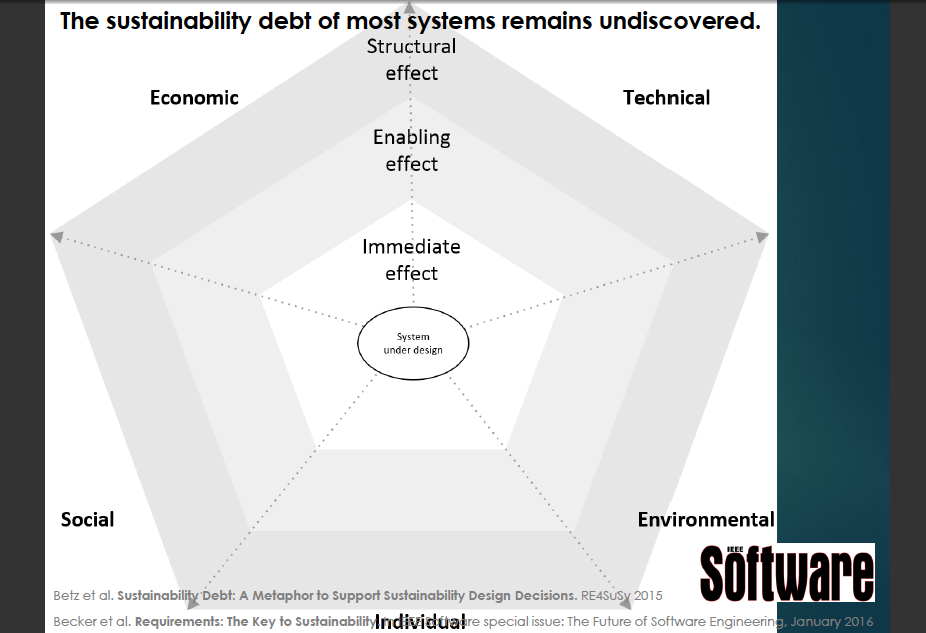 that is mostly unknown for most systems. The effects of sustainability (or lack thereof) can be considered from several angles; one way to look at this debt is across economic, technical social, environmental, and individual aspects, and whether it has an immediate, enabling, or structural effect. The concerns about sustainability have inspired the Karlskrona Manifesto for Sustainability Design, which seeks to address sustainability across different aspects and widening effects. The Manifesto identifies eleven “misperceptions and counterpoints”, seeks to correct or mitigate them, and educate and advocate for a constructive approach to enabling a paradigm shift.

Becker is particularly interested in studying how people decide on the trade-offs they make when designing software, and using the insight gleaned to develop and implement methods and tools for making better choices. PDF

After Becker’s talk, we broke for lunch, then went into four breakout sessions for a good part of the afternoon; the four selected by participants from the many that had been proposed were:

After working in our breakout sessions, we came back together to report on our progress. Wow, was there a lot of discussion! Everyone was very engaged in listening to, commenting on, and discussing the reports from the different groups. It was a very exciting afternoon, and discussion continued right up until we were forced to break for dinner.

As previously reported, we had a discussion in the evening as well. Monday was an excellent start to an outstanding week!

One thought on “Engineering Academic Software, Schloss Dagstuhl Day 0 and 1”