This is the second in a series of posts on the six-session Software in Astronomy Symposium held on Wednesday and Thursday, April 3-4 at the 2018 EWASS/NAM meeting.

BLOCK 2: Software publishing, impact, & credit
This session focused on using the available infrastructure to better reward software authors and ways to count these valuable research objects. The software contributions that enable much of the results in astronomy are often not recognized, nor considered for reward or promotion. Unlike most of the other sessions in this Symposium, this session had only three short presentations and devoted the rest of the time to an open discussion and Q&A. The session and discussion period was moderated by Rein Warmels (ESO, DE).

Federica Bianco (NYU, US) presented Understanding the Impact of Your Research Software to open the session. She stated that one should always cite software used in research, but “it’s not always obvious how.” She discussed a finding of Howison and Bullard (2015) in their research on software citation in biology articles: open source software is cited more informally than proprietary software. This means that software authors are not accruing credit for their contributions in a way that academia rewards: formal citations. Bianco mentioned Force11, which has published software citation principles, and the now-completed Depsy project, which sought to provide not only citation information on software but also to measure the impact and use of code through other statistics, such as downloads, number of contributors and number of projects reusing the software. Among Bianco’s suggestions for fostering good citation practices for one’s own software were to get a DOI for it and give users instructions on how the software should be cited. 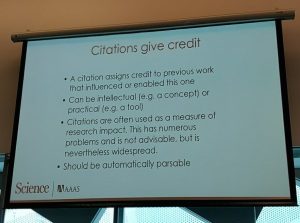 One of Smith’s slides

Keith Smith (Science, UK) spoke on Citation of data and software in astronomy: A journal editor’s perspective. Smith said that most scientific advances have their base on previous work, which requires reproducibility. Citations not only enhance reproducibility, they also assign credit. He provided guidelines for citing data and software, sharing bad, better, and good examples, and spoke of a virtuous cycle that will increase reproducibility in addition to the sharing of software and data. Smith mentioned the Center for Open Science Transparency and Openness Promotion guidelines, a policy framework for journals that was developed with journal and community input, and noted that though over 5,000 journals have signed onto them, none of the major astronomy journals have done so. Science’s policies require proper citation of data and software and release of data and software upon publication. Looking forward, Smith sees data and software citation becoming more common, as could be seen with a graph from the ASCL’s dashboard showing the increasing number of citations to its entries, and stated that journals have a role in improving reproducibility and proper citations through policies and editor and referee awareness of changing community standards.

The last presentation of this session was by Alice Allen (ASCL, US), who spoke on Receiving Credit for Research Software. She discussed recent changes in astronomy and in other disciplines

that make recognizing the contributions of software authors easier. These changes include new journals, both astro-specific and with a broader focus, specifically for software, policy changes for existing journals, and community resources; these resources include collaborative coding sites such as Bitbucket and GitHub and archival resources such as Figshare and Zenodo. Existing services such as the ASCL have been given new life and are growing; in its Next Generation project, arXiv is improving its support for linking data and code to research. Software citation is captured/tracked/counted by indexers such as ADS, Web of Science, and Google Scholar. Broader efforts to improve reproducibility, citation,

and credit, such as CodeMeta, Force11, WSSSPE, the FAIR principles, and DataCite involve those from many disciplines; the sharing of ideas influences not just those involved in the efforts, but has a greater reach with their aspirational and practical goals and guidelines. Allen shared steps code authors can take to increase the probability of having their software cited correctly and steps researchers can take to improve their articles by including citations for the computational methods that enabled their research, and provided a link to resources mentioned in her talk.

Rein Warmels then opened the floor for discussion. Someone asked whether GitHub would “be there forever?” The point was made that GitHub is not intended to be an archive, and that other services are, so use them to archive your code. On whether to release software, Smith stated that even horrible to read code is better than no code: “it’s hard, painful, and you may hate someone forever… but that’s better than nothing.” Science can provide software information as a supplement, so that is one way to ensure your software is available to support your research findings. In discussing software citations, All

en pointed out that ADS has not been able to automatically track citations to Zenedo DOIs, though that is expected to change soon. The issue of what exactly to cite also came up – should one cite all the dependencies needed to run a particular research code? Neither astronomy nor other disciplines have a way to handle this; at this time, the recommendation is to cite the research software you use well so others will know what your work relied on, and leave it to the software sites to identify the dependencies.

Understanding the Impact of Your Research Software by Federica Bianco (pdf)