We want to share some of the posters that are appearing at ADASS this week (with permission of their authors). Montage is in the ASCL; we love this poster for several reasons, but especially because it makes clear that sustainability of the software is important! 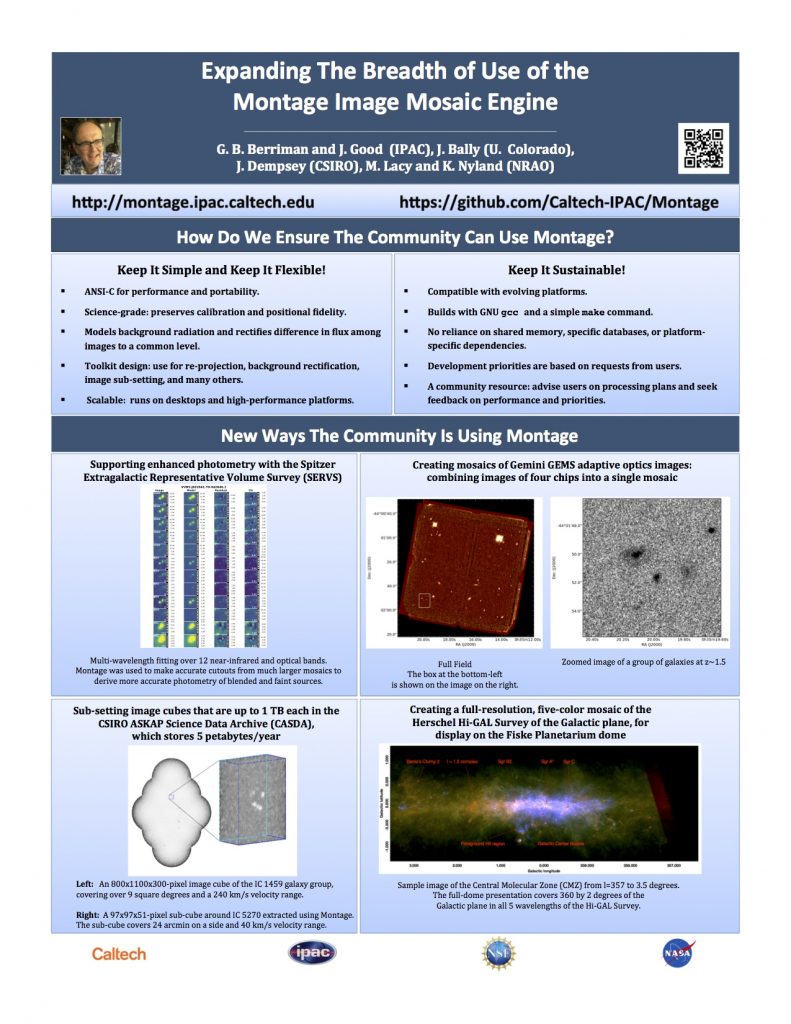 Abstract: The Montage toolkit is finding exceptional breadth of usage, far beyond its intended application as a mosaic engine for astronomy. New uses include:
– Visualization of complex images with data overlays: e.g. as a re-projection engine integrated into the server-side architecture of a Gbit visualization system supporting investigations of 3D printing with the X3D protocol creation of sky coverage maps for missions and projects bulk creation of sub-images of multiband photometry data creation of plots in the APLPy library.
– Creation of new data products at scale: mosaics of Gemini AO images from the Gemini Multi-Conjugate Adaptive Optics System/Gemini South Adaptive Optics Imager (GEMS/GSAOI) instrument, from the VISTA VIDEO and the UKIDSS DXS surveys welding the Herschel infrared Galactic plane (Hi-GAL) far-infrared Survey into a set of large-scale mosaics, for planetarium shows at a digital as well as for research
– As a re-projection engine to support discovery of 86 Near Earth Asteroids (a U.S. congressional mandate) in the Lincoln Near-Earth Asteroid Research Program (LINEAR).
– Integration into data processing environments: integration of the 4D image cutout tool into the VO-compliant CSIRO ASKAP Science Data Archive (CASDA) as a re-projection engine for the Dark Energy Survey (DES) pipeline.
– Discovery of imaging data at scale: use of memory mapped R-tree indices to support searches for spatially extended data, in use in Spitzer and WISE image searches and in spatial and temporal searches for WISE and KOA.
It has been cited as an exemplar application for development of next generation cyber-infrastructure in 238 papers between 2014 and 2016 to date. What has enabled this broad take-up is that Montage has been built and managed as a scalable toolkit, written in C and portable across all common *nix platforms, with minimal dependencies on third-party software, such that it can be built with a simple “make” command. All the components have proven powerful general-purpose tools in their own right, even those first developed to support mosaic creation, such as discovery of images for input to the engine and for management of mosaics. We describe how Montage is managed to assure that the benefits of the architecture are retained, and how we ensure that new development is driven by the needs of the community.