On Tuesday at ADASS, ASCL Advisory Committee Chair Peter Teuben led a Birds of a Feather session intended as a working session to have people put some of the ideas for improving software citation and credit into practice. 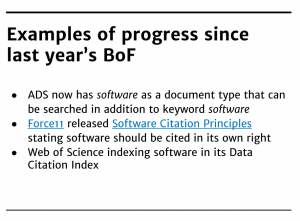 He opened the session with a few remarks about last year’s BoF, similar efforts elsewhere, and examples of progress since last year. Yes, there has been progress! He then showed a list of actionable items and asked people to work on them, adding their work to a common Google doc. His slides are here.

And they did! It was the quietest BoF ever, I believe, as Keith Shortridge, Bruce Berriman, and Jessica Mink wrote about their experiences in releasing software; Renato Callado Borges and Greg Sleap provided guidance on the types of software contributions that add value to science; Alberto Accomazzi, Nuria Lorente, and Kai Polsterer listed ways one can publish and take credit for software; Peter Teuben, Steven Crawford, and possibly others pulled together a list of organization web pages about software created at the institutions, this as a way to highlight and recognize scientific software contributions; Maurizio Tomasi added a suggestion for gathering licensing information; and Thomas Robitaille, Ole Streicher, Tim Jenness, Kimberly DuPrie, and I discussed exactly what should be in the “Preferred citation field” of the ASCL and various people listed about a dozen preferred citations to be added to the ASCL and others used the Suggest a change or addition link for several software packages to provide preferred citation information.

Though Peter had asked that people work for about 30 minutes, he monitored contributions to the Google doc and saw work was still being done so did not call us back together until only 15 minutes or so were left in the session. Instead of having people report back on what they had done as originally plan, he asked for other feedback instead, as progress made was evident in the shared document, and after a bit of discussion on licensing and a few other comments, closed the session.

Though the session is over, the next phase is to put this information to use or disseminate it in some way so it can do some good and be the changes we want to see for software!