This is the third in a series of posts on the six-session Software in Astronomy Symposium held on Wednesday and Thursday, April 3-4 at the 2018 EWASS/NAM meeting.

BLOCK 3: Software packages for research
Amruta Jaodand (ASTRON, NL) moderated the third session of the Symposium, which featured talks on seven different software packages. The first presentation was by Sergio Martin (ESO, CL), on MADCUBA and SLIM: A lightweight software package for datacube handling and spectral line analysis. These software packages offer features for easier use of the ImageJ image processing framework; this framework is widely used in other disciplines for multidimentional images. SLIM provides a synthetic spectra generation and automatic fit to observed spectra; MADCUBA provides an interface to handle and manipulate multiple datacubes, process large datasets quickly, and is scriptable. Alex Hamilton (UHull, UK) presented SunPy the Open Source Solar Physics Library, giving an introduction to the package, which collects, manages, and analyzes data from many solar data sources, and sharing information on its new features and capabilities.

As one of this session’s presenters was doubled-booked, we made adjustments to the order of presentations, so The next-generation cosmological code SWIFT was the next talk; this was given by Matthieu Schaller (LeidenU, NL). This package, due for release this summer, uses task-based parallelism for intra-node parallelization; testing has demonstrated that it is more than 30x faster than the code Gadget on representative cosmological problems while using fewer resources. The next talk had generated a lot of interest, as it is not a usual astronomy conference offering. Maisie Rashman (LJMU, UK) spoke about Developing and applying astronomical software for novel use in conservation biology. The team Rashman works on has developed a pipeline using astronomy techniques to identify and 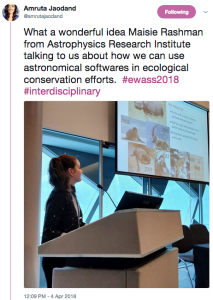 track animals; their goal is to create a fully automated system for species identification, population tracking, and combating poaching using drones. After Rashman, Shane Maloney (Trinity College, IE) presented xrayvision – a collection of image reconstructions methods for X-ray visibility observations. The xrayvision package is built atop other packages, including SunPy, and fills a need for an open-source solution for these observations. One of the project’s goals is to provide access to people in poorer countries to software for solar physics. The cleverly-named software package PampelMuse was presented by its author Sebastian Kamann (LJMU, UK) in his talk Crowded-field 3D spectroscopy with PampelMuse. This Python software performs PSF deblending on the integral-field data; several thousand sources can be deblended simultaneously. The final talk of this packed and fast-paced session was by Matteo Bachetti (INAF, IT) on Stingray, HENDRICS and Dave: Spectral Timing for all. Stingray is an AstroPy affiliated package that merges timing and spectral analysis for X-ray spectral timing. The idea for spectral timing arose in a meeting at Leiden University two years ago, where a team formed and started

working on the project; the code is under active development. By combining Stingray with the HENDRICS (for shell scripting) and Dave codes (a GUI atop Stingray), the team will provide the community with a Python API (for the brave), a GUI to ease the learning curve, and shell scripting capabilities for batch processing, for advanced spectral timing with a correct statistical framework.

Stingray, HENDRICS and Dave: Spectral Timing for all by Matteo Bachetti (pdf)

One thought on “Software in Astronomy Symposium Presentations, Part 3”