Twenty-five codes were added to the ASCL in August 2019:

I’ve set a goal of bringing the number of entries missing preferred citation information to under 1000, though that might be just beyond possible. When I started this process, there were 1284 entries without a preferred citation; I’ve examined the software sites and documentation of 150+ of these codes so far and have found explicit citation information for just over 14% of these.

In general, we include a preferred citation in an ASCL record when a code’s site or documentation explicitly states what should be cited (“cite [code] with this [ASCL entry/article/DOI/etc.]”). We don’t assume a paper listed under “References” or “Articles” is intended to be for citation, though that may be the intent of some authors listing them, as some list these papers because a code is built upon others’ work, or these papers include research that used the software.

In some cases, a particular software has no citations to the ASCL record and numerous citations (> 25, let’s say) to a code description paper even though the download site or repo does not specify how the software should be cited. Allowing this “apparent established practice” of citation to substitute for an explicit statement and listing the description paper as the preferred citation seems fair to me, and valuable to those who want to do the right thing by citing a software package but don’t find guidance for how to do so on the code’s site. 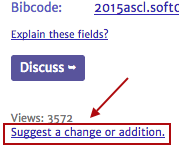 Do you want to discuss different software citation methods before selecting a preferred method? Did I get your software’s preferred citation wrong or miss it entirely? If so, please let me know via email or the Suggest a change link at the bottom of your code’s ASCL entry.

At lunch yesterday, I was asked in what year the earliest code ASCL has was written (or was first created). I didn’t know off the top of my head, but thought probably in late 70s. (The earliest I ever pursued was from the 60s, IIRC, & though I found an working email address for the woman who wrote it, which was amazing in itself, she no longer had the code, alas.)

But the question got me to wondering, so in a quick look, here’s what I found: three codes that were initially created in 1978:

All of these have undergone further development and are still in use, as indicated by citations to them in papers published this year.

Are these the most long-lived codes we have? Are there codes that were started even before 1978 that are still in use? Probably. Maybe part of the Starlink (ascl:1110.012) code base? Something else?

If you know of one or can find one in the ASCL with a history that goes back further than 1978, please let us know in the replies. 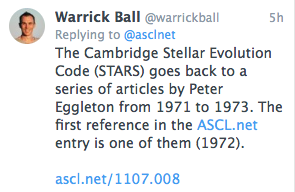 Yes! There is one code that goes back even further, to 1972. Warrick Ball (@warrickball), a postdoc at the University of Birmingham (U.K.), replied on Twitter that the stellar evolution code STARS (ascl:1107.008) got its start in 1971, and the 1972 article which describes the code is listed in the ASCL entry for it. The code is still in use and was cited earlier this year. There’ll be dark chocolate heading Dr. Ball’s way as soon as the weather cools off; kudos to him for finding the answer to this question!

Thirty-two codes were added to the ASCL in July 2019:

In June, I was invited to participate in a one-day workshop as a member of an expert panel for the The Open Source Software Health Index Project. The subject of software citation came up at lunch with other panel members, and someone suggested that because of the limit on references in prestigious publications, citations for software may be dropped to make room for article citations. This surprised me, since I know that several highly-regarded journals have published articles on the importance of research software, have edited their author guidelines to include more and better information on citing software properly, and have improved how citations to ASCL entries, for example, are treated to ensure their proper capture and tracking by indexers.

So I wrote to editors at a number of prestigious publications such as Nature and Science to ask whether their publications might consider exempting software citations from the reference limits. The prompt replies stated that there is no need to do so: there is room for essential references, and even if there are (soft) limits on the number of references in the main text in the print journal, they are unlimited in the online supplementary materials, the reference list appears in full on the website (the version that has the most readers), and all are picked up (or at least made available for ingestion) as citations in bibliographic databases.

Here is a case in point: this Science paper was printed with a limited number of references, but all 113 appear in the online version, and 92 of them were captured by ADS. Those not captured by ADS include one of the four software references, which is only a link to a website, and other references that are similarly not formatted well for tracking or are to resources ADS does not ingest. 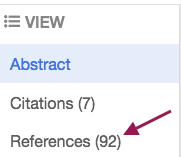 I’m very pleased — and relieved! — to know the commitment to have code cited well carries over to practice and that limiting citations in print format, when this might occur, does not appear to inhibit nor restrict software citation. 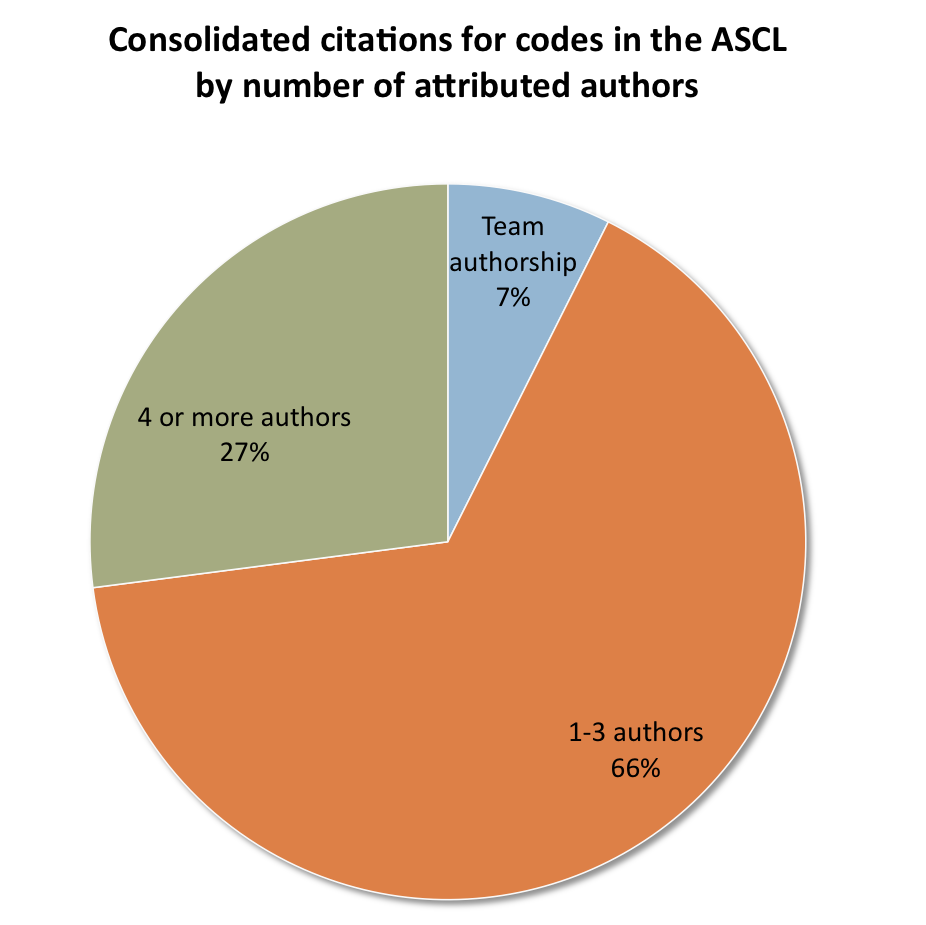 We were asked recently how many of our entries were attributed to one, two, or three authors. Would you guess that over a third of the codes in the ASCL — 35% — have only one author? Codes with 1-3 authors attributed, what we dubbed “short author list” codes, account for 68% of our entries. We ended up writing a short paper, published by Research Notes of the AAS (RNAAS), about authorship and citation numbers for team and short author list codes. It was a quick look and we hope to look more deeply into this; if you’d like to do the same, you can download our public data in JSON and find the code that we used for consolidating citations on GitHub.

Twenty-two codes were added to the ASCL in June 2019:

Catherine (Katie) Gosmeyer recently joined our editorial staff as an Assistant Editor. She’s a Scientific Software Developer at NASA Goddard Space Flight Center and works on the ICESat-2 calibration team; formerly she was an analyst at Space Telescope Science Institute (STScI) working on Hubble and James Webb Space Telescopes. Katie is very interested in open source software and improving research and approached me after a presentation I gave at GSFC about volunteering for ASCL as an editor. Yes!! She has dived right in, and joins Associate Editor Kimberly DuPrie, who is at STScI, and me in creating and editing ASCL entries. Welcome, Katie!

The ASCL has once again partnered with others on a Special Session at EWASS. This year’s Special Session (SS34) is titled Understanding data: Visualisation, machine learning, and reproducibility, and will be held on Tuesday, 25 June, in Room 3. Not at EWASS? Follow the session on Twitter at #ewass19ss34.

Full information, including abstracts for the presentations listed below, can be found in the detailed interactive program; look for the sessions in yellow and labeled SS34a, SS34b, and SS34c.

Tuesday, 25 June, 16:30 in Room 3, chaired by John Wenskovitch
Visual Analytics of Data in Astronomy by Johanna Schmidt
Visual analytics algorithms for multidimensional astronomical data by Dany Vohl
Pulsar to Person (P2P): Data Visualization & Sonification to Experience the Universe by John Wenskovitch
Lightning talks for e-Posters
These talks are followed by an open discussion moderated by the session chair.

I spent two days last week at the Open Digital Infrastructure in Astrophysics meeting at the Kavli Institute for Theoretical Physics (KITP) at UC Santa Barbara. This meeting featured presentations on open-knowledge digital infrastructure projects, the communities around them, their metrics for success, funding, diversity efforts, and plans for sustainability. Yeah, we’re talking code, a lot of code, and code projects, too, from AstroPy to yt, and data, and efforts that support openness and research transparency.

Open data presentations were given on:

STScI data, which includes JWST, Hubble, and PanSTARRS data, and the discovery and analysis software for these archives, by Arfon Smith
SDSS Data Infrastructure, by Joel Brownstein
LSST Transients data, by Federica Bianco
Open gravitational wave data and software tools for these data, by Duncan Brown

These software projects were represented at the meeting: 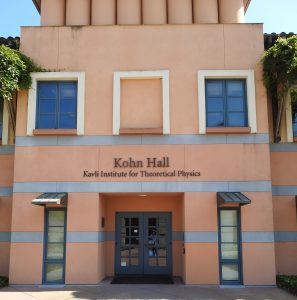 Other open digital resources presented were:

The meeting hashtag was #OpenAstroInfra, and many of the presentations were live tweeted. They were also video recorded and the podcasts are available on the KITP media page for the meeting, as are most of the slide decks. Participants of the co-located “Better Stars, Better Planets: Exploiting the Stellar-Exoplanetary Synergy” and “The New Era of Gravitational-Wave Physics and Astrophysics” programs were encouraged to attend, and we had a raven or two trying to have lunch with us as well.

Each of the presentations had about 15 minutes devoted to questions and discussion about the project highlighted. In two of these discussion sessions, the presenters were asked whether they were concerned about “improper use” of a code; sometimes people who are not well-schooled in the theory or science underlying a software package will use the code incorrectly, arriving at results that are dodgy, or downright wrong, and in a few cases (I know of only one), have then claimed the software is in error. This fear has been given as the reason some software authors do not release their code. I was cheering in my head with Jim Stone’s response to this question the first time it came up; he stated that there is so much benefit to making the code available that a potential improper use should not stop release. (YES!!!) He further went on to say, as did others in the room, that science will correct the record (YES!!!!!). I could not agree more with these replies, and it was great to hear these sentiments from others.

This was my first visit to KITP, and what a wonderful introduction to the institution it was! So many excellent projects, and so much exciting work being done in the open! My thanks to organizers Frank Timmes, Lars Bildsten, and Rich Townsend for inviting the ASCL to participate, and to the Sloan and Ford Foundations for funding the meeting.